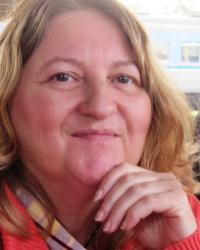 Stacey began studying timebanking while searching for a new career after 35 years as a small business owner and working artist, attending the University of Maine at Augusta in 2007. Struck by the timebank model’s simplicity and unusual potential to absorb her varied interests, she interned at a start-up timebank nearby. In the timebank, she was free to pursue her interests in writing, painting, music, and helping others.

In 2009 she earned the Distinguished Student of the Year Award upon graduation with a Bachelor in Liberal Studies, and was hired to take over the timebank project for its sponsor. Eventually, the funding dried up and Stacey continued to work for Time Credits alone, earning thousands while she expanded the timebank statewide and built a strong relationship with TimeBanks USA as a writer, collaborator and software advisor. She then took her studies further to delve into the deeper issues of timebanking and sustainability, earning a master’s degree in Communication and Leadership Studies from Gonzaga University in 2013.

“Most assignments were open for me to use them to target a particular facet of timebanking, helping me to work through challenges in the timebank and develop a keen eye for its societal impact. One could say that, with the culmination of my thesis on timebanking as a form of communication, I earned a master’s in timebanking.”