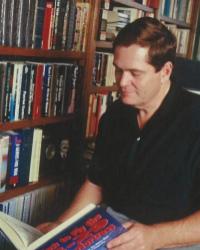 Ken received a Bachelor's of Science in political science from Arizona State University then continued his studies in international relations as a graduate student at Georgetown University. Following an internship with the National Security Agency, he was hired at Beverly Hills Securities in Beverly Hills, California, leading to a post as an international investment banker. Thereafter, and over the course of the next decade and a half, Ken owned and operated his own firm, THE MOORE FINANCIAL GROUP. He successfully sold it at age 45. With that Ken now sought to fulfill his life-long passion of bringing closure to the families of America's MIA's, the brave men and women who fought and died to preserve our nation whose remains still linger on yesterday's battlefields. To accomplish the objective, he designed and headed a 501C-3 non-profit organization known affectionately as Moore's Marauders. From all around the world volunteers stepped forward setting forth on a global mission to locate the remains of America's fallen. Married to the love of his life now for 40 years, at age 71, Ken and Patti live in Scottsdale Arizona, where he as the "First Marauder," continues to write, seeking to tell the tales of the unparalleled bravery and determination of his teams of volunteers and the heroes they sought.