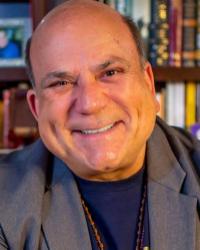 personality; musician; and one of the top 50 inspirational speakers in the world.

His many bestselling books include The Attractor Factor, Attract Money Now, Zero Limits, and his latest releases The Miracle: Six Steps to Enlightenment and Anything Is Possible.

A popular leading expert on the law of attraction in many movies, including The Secret, Dr. Vitale discovered the "missing secret" not revealed in the movie. He's been on Larry King Live, Donny Deutsch's “The Big Idea,” CNN, CNBC, CBS, ABC, Fox News: Fox & Friends and Extra TV. He's also been featured in The New York Times and Newsweek.

One of his most recent accomplishments includes being the world's first self-help singer- songwriter as seen in 2012's Rolling Stone Magazine®. To date, he has released 17 albums! Several of his songs were recognized and nominated for the Posi Award, regarded as “The Grammys of Positive Music.”

He is a seeker and a learner; once homeless who has spent the last four decades learning how to master the powers that channel the pure creative energy of life without resistance, and creating the Miracles Coaching® and Zero Limits Mastery® programs to help people achieve their life’s purpose.