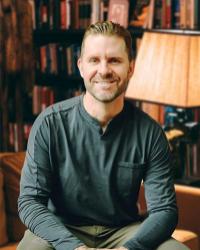 Adam Eisenberg is a third-generation veteran and a former Sergeant and infantry squad leader in the United States Army. As a member of Alpha Company, 3rd U.S. Infantry (The Old Guard), Adam served with distinction in a variety of ways. He was a first responder at the Pentagon on September 11th, 2001, and assisted in the cleanup efforts for an additional 20 days after. He was also a "true blue" recipient of the Expert Infantryman Badge and performed over 1000 burials as a casket team member and leader in Arlington National Cemetery.

Outside of raising awareness on veteran's issues, Adam also devotes a great deal of time sharing his perspective of what he did and didn't see throughout his time on-site at the Pentagon. What makes Adam's perspective so unique is that it comes from an accredited standpoint of having professional work experience with aeronautical parts. Overlaying these experiences, Adam also provides firsthand, eye-witness testimony and incredibly detailed photographs and evidence that presents a much different story than the mainstream narrative suggests.

Adam currently lives in St. Louis, Missouri, where he owns a real estate company and spends a great deal of time studying self-mastery and the nature of reality.